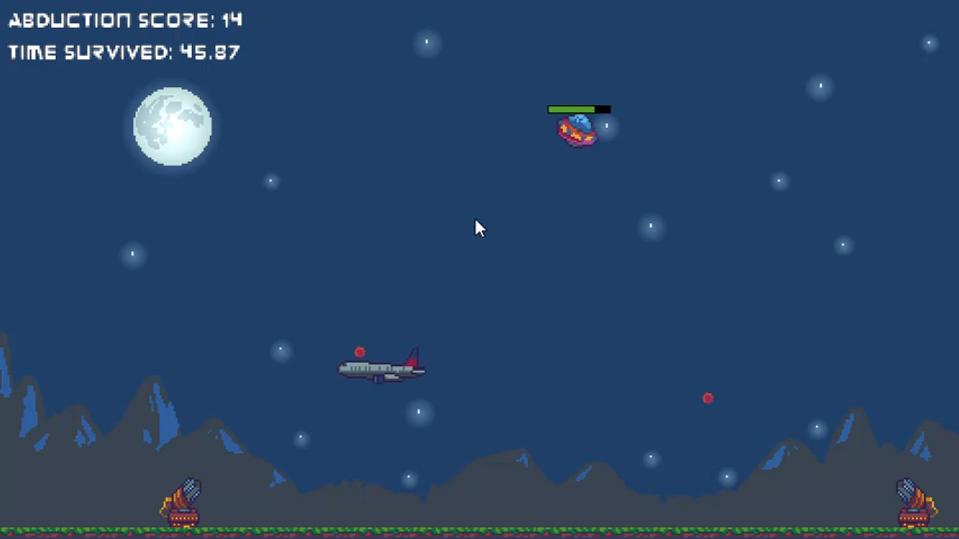 Progressing daily is what it’s all about. As you see along this process, as I make updates to the game, I also add skills to my toolbox, while also learning the GMS game engine. Adding to your knowledge, and your arsenal each day will keep you growing, and keep you progressing, which is what life is all about(for me anyways)! This update is no different. There are a handful of updates that were put into effect on 8/7/21.

First off, I added an Instructions page right at the start of the game, so Players know what to expect, and how to play the game. Right after that comes in a simple credits page, thanking all those who helped out with the project(pixel artist, sfx artist, and musician for background music). During the gameplay itself, this is where I added in the airplanes flying in randomly from both the left and right hand sides of the gameplay screen. I also added a loop in the script which slowly shortens the time between shots from both of the turrets. So the longer the player lasts in the game, the faster the turrets will shoot each projectile. I had not begun increasing the projectile speed at this point, just the interval between projectiles shot.

The airplane system was an fun mechanic to implement. I basically set a variable to set a random value on the y axis of the game screen, along with a random timer which is placed into another variable. Once the timer goes off, a plane spawns on the left and/or right side(s) of the screen, and are initially aimed at the Player’s x and y coordinates within the gameplay area. This basically has an airplane randomly spawn on either side of the screen at random times while playing the game, and sets their trajectory towards the player. They do not follow the player after they have begun flying into view however, and they will stay on the angle they have set themselves to once they spawn into existence(again, based on the players current x,y position on screen).

The loop system for the turrets shooting was a bit complicated(for me anyways, just relearning GMS). In the end, I ended up making it much easier than it was in the beginning. Basically there is a variable for the time in between each shot of the turrets. While playing the game, that variable is slowly reduced, which thus reduces the amount of time between each projectile shot from the turret. It becomes shorter and shorter, until it reaches a limit set for the shortest amount of time possible between shots. This adds a bit more difficulty to the gameplay, and later on in another version the projectiles will begin to ramp up in speed as well.