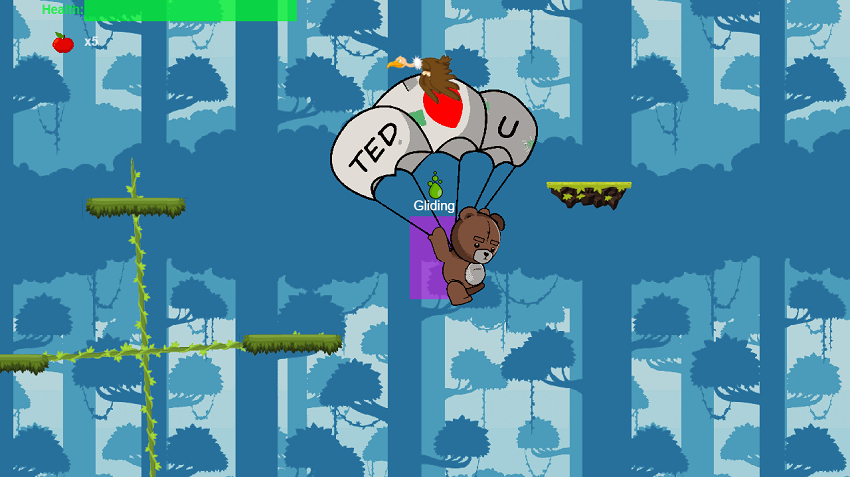 For a while now, I’ve been gearing up to start recording my first full length Game Design and Development educational tutorial series. It will be focused around recreating my current Platforming Game Project titled, “Teddy’s Adventures”. I’ve shared a couple of short videos covering the project in recent Blog Posts. But, I’d like to cover some of the features which the educational series will cover here with you today. These features are highlighted below, along with some of the videos I’ve uploaded to YouTube already.

First off, you will learn the basics of creating your own Player State Machine/System. If you’ve noticed in the past videos, I’ve left some of the debugging objects and text visible during the video of game play. The text that you see above the Player Sprite, is basic debugging text which reads off the Player’s current “State”. Basically, the State Machine/System, will check to see which state, Teddy is currently in. Each state which is setup for Teddy will perform the proper actions, while automatically playing the proper animations for those states/actions seamlessly.

This makes the design/development process of any game much faster and easier. Rather than changing to specific animations, and then performing the proper actions. There is a simple action in the main game event sheet which changes Teddy’s state with every step of the game, and then the various animations Teddy has will share the exact same name as these states. Then it’s as simple as checking Teddy’s state, or changing the state, while performing the proper actions. Then, let the State Machine handle everything else. This is very useful to make sure Teddy is not in certain states, while moving into other states, collecting power-ups, etc. States such as, Walking, Running, Jumping, Double Jumping, Edge Grabbing, Sliding, Wall Sliding, Gliding, Various Attacks, and more 🙂

Next we will slowly begin adding in some of the basic platformer enemies. Some with only melee attacks, and others with both melee and long range attacks. In this section, you will learn how to incorporate basic AI into the enemies. And, have the objects they interact with spawn on the layout automatically when the layout loads up. Rather than placing each and every object in the Layout Editor manually, which also saves you a ton of time. You can see a few of these in the video below.

These enemies will work off of the Family Object within Construct 3, which I talked about in fair length in a previous post linked to here. I will teach how to isolate certain objects from the family object, such as “Sensei Cat” which can be seen in the video above. If you come within his range, or try to attack him. He will simply stand that and shake his head, “No” in your general direction XD. From there we will begin adding more and more interactive objects, and various platforms into Teddy’s World, shown in the video below. These objects include, bouncing trampoline like objects, moving platforms, falling platforms and more!

After all of that. We will dive into adding some flying enemies into the game, and a collectable item which is used to take them down(literally). Most of the flying enemies will patrol their starting position and set range of the level layout. Then give chase after Teddy when the player comes too close to them. If the player loses the enemy’s range of sight they will fly back to their starting position, to begin patrolling their personal area all over again.

The item will be an Apple projectile, which will be collected throughout each level, and can be thrown at flying enemies to cause them damage. Along with all of this, I’ll be covering how to add in more player attacks, such as the “Butt Slam”. Certain enemies can only be taken down by using this new ability. You can view the Butt Slam technique, flying enemies, and platform enemies which can only be damaged by performing a Butt Slam, in the video below. Think of it like the butt slam for Mario and/or Yoshi, which can flip certain enemies upside down. And, can also be used to break certain objects, and cause extra damage to certain enemies.

After all of this. We will dive into adding more objects which will interact with the Butt Slam technique, if the new technique is performed within a particular set distance/range to each object type. Such as certain blocks which will fall, or can be crushed using the butt slam technique. Today I’m working on various methods to spawn power-ups and other items from the crushable blocks. Which will fly out of the block and bounce away to be caught by Teddy, and put to good use 🙂

This is only the beginning of what will be covered in the tutorial series. And, creating unique enemies such as the Vulture, which patrols the skies to drop projectiles once it is positioned over head of Teddy. Along with how to create Functions, rather than repeating the same events over and over again. Which will cut back on development time, and total size of the project. Design a User Interface(UI) to track Health, Apple Count, etc. And, much much more. I hope everyone is looking forward to taking part in learning the process of developing a Platformer Game using Construct 3 through this series 🙂

I hope everyone is having a fantastic day/week. Have Fun, Be Safe, and Take Care! As always, Thank You, for taking the time to read this post, and take in any of the videos above. I very much appreciate the support the game development community has provided so far. And, I will continue supporting the game dev community as much as I can. I try to take time each day/week to help out new developers in the Scirra community. So if you are a member of their community found here Construct Forums, you may see me from time to time helping folks where I can.