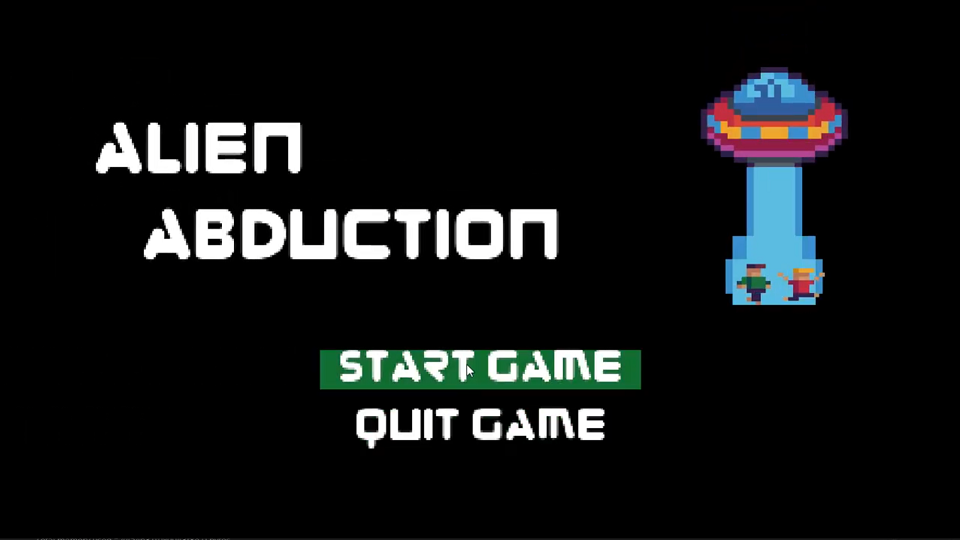 There were quite a few updates on 8/5/21. A couple of them were quite time consuming, namely the animated Title Screen, and the Game Over screens. But, the good part is, once I had the animation timelines down for the Title Screen, I was easily able to copy them, and change around a couple buttons, and their scripted actions(where they take the player within the game when clicked), and for the most part reuse them for the Game Over screen as well.

In this quick update, the features added were as discussed above, the Title Screen, and Game Over Screen sections. In GMS and most game engines these are their own separate “rooms”, or levels that contain the art, effects, buttons for the menu options. Along with adding a second Civilian(colored red which gives 2 abduction points, rather than 1). There was also a short invincibility timer added to the player to avoid heavy damage. Basically after the UFO gets hit, it will not collide with projectiles and planes(coming in later on) and take any damage for about a second and a half. That way the player does not get beat around to a pulp with no chance of survival. That comes in handy especially if you last long into the gameplay where things get very fast moving and hectic! But, eventually the player will always get taken down, it’s only a matter of time. Then last but not least I added the variables to store the “Abducted” and “Time Survived” scores, along with the scripting to have them written out and updated over time in the upper left corner of the gameplay screen.

This was also the first time I had used the sequencing and timeline system within GMS. This was used for both of the menu screens(Start & Game Over). The title text “Alien Abduction” was made into a sprite/object, and uses a tweening effect as it comes onto the screen. The menu buttons simply slide in from the left, and then stop at their positions. While also a large version of the UFO sprite comes in from above and sends out the abduction beam on a couple of animated civilians. Overall I’m happy with how the menu screens came together, and the overall effect and vibe they have.

Sequencing, and the ability to use animated timelines has been a great addition to the GMS application. It’s also available in some other major game engines as well, making animation sequences fairly easy to do, especially once you get to the particular setup the engine uses for the sequencing, tweening, special effects, etc.

Below is a quick video and screenshot to show off where the game was at on 8/5/21.