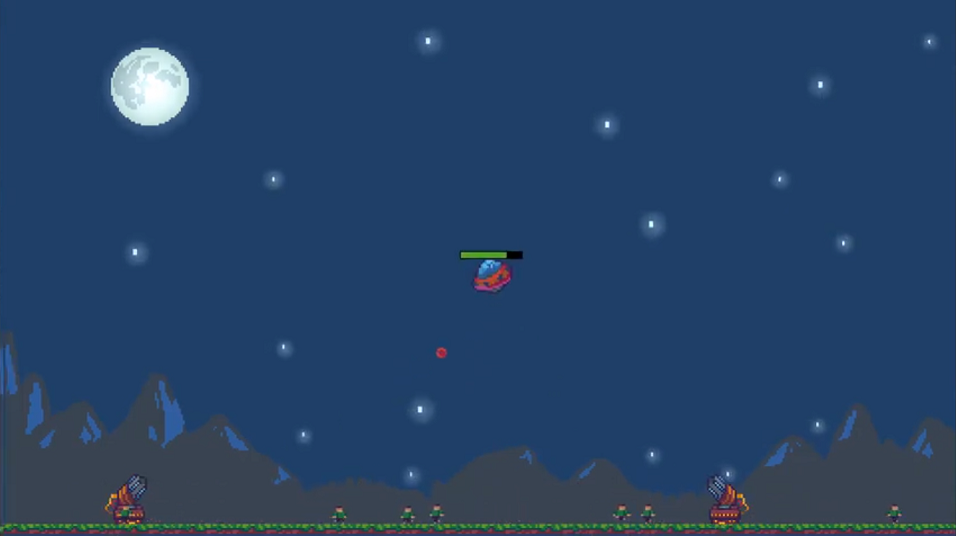 The progress made on 8/5/21 was pretty solid. Adding in some more animations, and visual effects to the game. Not a whole lot changed from the last update, I’ll cover it quickly below.

I basically added several different things at this point in the game development process. I added simple side to side animations for the player’s UFO object, to show it tilting left and right, as I had in the mockup a couple versions back. If the UFO object gets hit by a projectile, it also uses that same tilt animation, while moving in the opposite direction the projectile comes from(so it looks like it is being hit and pushed back as it takes damage). Also changed it so the civilians’ sprites turn around once they hit their collision point to reverse direction(so they are not walking backwards). Speaking of “Civilians”, this was when I added the spawner objects that spawn more civilians. You cannot see them as they are invisible, but at a random set amount of time a new civilian will spawn in three locations at different times, then reset itself to a new random time to spawn another civilian. I also added a glow effect to the Moon, and the Stars in the background sky. If you fly in front of any of them, especially the moon it will actually light up the UFO sprite as well, which is pretty nifty, if I say so myself. The last thing added was player death once their HP reaches zero, which includes an explosion animation, and then a basic restart of the entire game.

One thing to note. The music you hear in the update video below is not mine, and does not belong to me. I just happened to have a playlist playing in the background while working on the project, as I usually do, and this song was playing as I recorded the update video to upload to youtube. It is a song called “Red Eye”, off of the album “Into the Blue Again”, by the artist “The Album Leaf”. It is a lovely and relaxing song, so I recommend checking it out if you have several minutes, or looking for something relaxing to play in the background. Very chill vibes 🙂