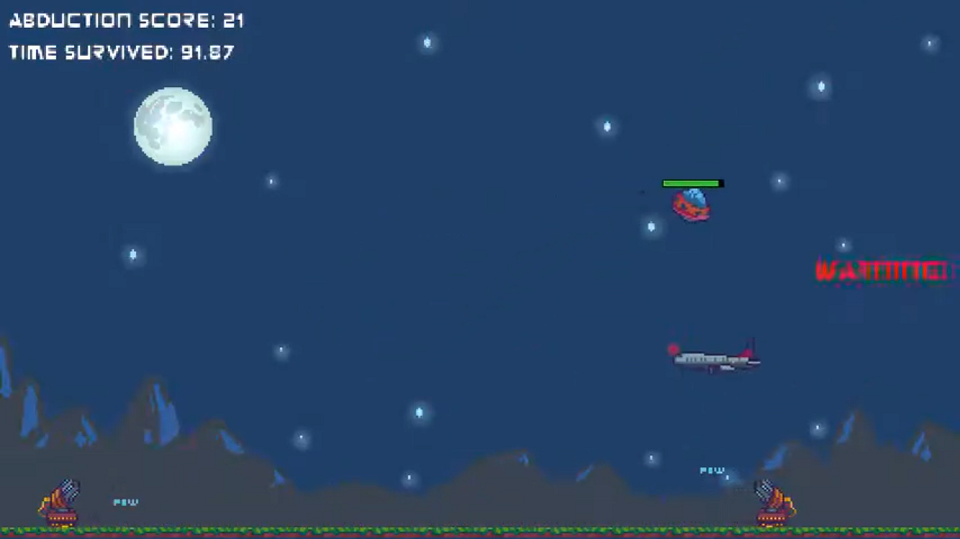 At this point of the process, it was time to start adding some sounds and some other effects to the gameplay of this competition project. As well as more timer loops to make things increasingly difficult as the player plays the game. Everything ramping up in speed and getting more and more difficult as time ticks by on the “Time Survived” Score. I had stopped recording videos everyday, and this was the first upload of the project since the 7th of August.

As far as the effects go, I added a couple simple sprites. One for the airplanes coming in from either side as a warning to the player. For these I used the same font as the rest of the game, and used it to create a red “Warning” sprite, that flashes a couple of times on which ever side an airplane is coming in on. This definitely helps out later on, as the airplanes begin picking up speed! The other sprite I added is a small “Pew Pew” sprite for the turrets, when they fire off a projectile. These I set to spawn randomly around the turret that is shooting, then fade and be destroyed after they finish playing their animations.

Speaking of things “picking up speed”, during this time was where I began playing around with timer loops for both the projectile, and airplane movement speeds. Very similar to the timer loop mentioned earlier where the time interval between turret shots becomes shorter and shorter. Except these increase the speed variable for either the projectiles, or the airplanes overtime. The video came out very fuzzy with this upload, I’m not sure why. But, you can see everything quickly picking up speed overtime as the player survives.

That was about it for this update. The competition ended on August 13th, so I only had a few more days to fine tune some things, and then get the game ready for submission to the contest. Again, there were many days during this whole process where I would hit a major obstacle/road block and want to give up all together. I found taking breaks, going for a walk, eating some food, staying hydrated, all helped get back into the game and keep going forward with the project. Sometimes switching gears and working on a different aspect of the game helps as well, then return to the obstacle at a later time with a clear head.